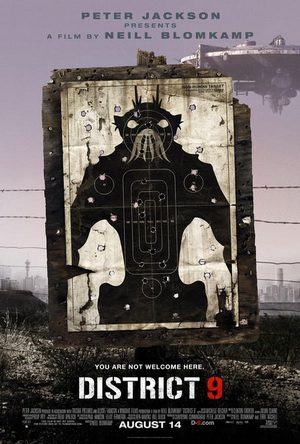 Last night I watched the movie DISTRICT 9 on Blu-ray. It was, in a word, amazing. I knew very little about the movie before watching it, and beyond knowing it was about aliens in an internment camp-type scenario, I had no idea what it was about. If you haven’t already seen it, don’t read any further – go rent this movie.

Here are five reasons why I think this movie is absolutely fantastic.

1) The story is gripping and realistic; other than the fact that it’s based on aliens landing on planet earth, everything about the plot and characters is extremely realistic. It has a documentary feel that draws you in. The writing team of Neill Blomkamp and Terri Tatchell is responsible for some great stuff here. It helps that one Mr. Peter “Lord of the Rings” Jackson lent a hand as a producer.

2) It moves you emotionally; at the beginning of the movie when humans are spouting racist remarks, many of them black South Africans themselves the victims of institutionalized racism, it’s shocking and repulsive. The movie doesn’t shy away from the inherently tribal nature of human beings; the fear and dislike we have of outsiders, of “The Other”. I felt very emotionally invested in the movie – I went from disliking the main character, to feeling pity for him, to hating him, to cheering at his redemptive act. The movie will move you.

3) The computer animation is jaw-droppingly realistic; never in my life have I seen computer animation this realistic. If you look at a lot of movies heavy with CG, much of it is done in dark scenes; CG is easier to pull off when the unpredictable nature of sunlight isn’t scattering across every inch of the scene. There was only one time in this entire movie when I saw something that didn’t look realistic with the CG: a dust cloud kicked up when one of the aliens was thrown into the ground. The rest? Amazingly real. In fact, watching this movie made me a little mad at every other CG-heavy movie for being so painfully obvious about the CG. I really had no idea that CG could be done in such a realistic fashion. The CG in this movie isn’t gratuitous – every scene that has it needs it, and it all feels very real. When watching this movie I kept saying “It looks so…real!” over and over again. The aliens in bright sunlight looking like actors in a costume – a freakishly realistic costume – were very life-like.

4) It was made on a budget of only $30 million dollars; that’s small change in the mainstream movie industry today. $30 million is the budget for a romantic comedy with mid-level Hollywood stars. The fact that this movie was created at a level of such perfection, and for only $30 million, makes it all the more impressive. To date, it has grossed $204 million dollars. How would you liked to have been an investor on this project? I know I would have!

5) It was created by 30-year old, first time writer/director Neil Blomkamp; he’d never created a feature-length movie before this one. Previous projects include the Hal0 3 Landfall short, and Tempbot, another short. For a first-time feature length effort, calling this movie a home run is like saying Babe Ruth just swung a stick at a ball. If I could buy stock in a human being, I’d invest heavily in one Mr. Neil Blomkamp. Assuming he doesn’t get destroyed by the Hollywood machine, he has a very bright future. It’s a shame the funding for the Halo movie fell through; he was set to helm it, and he could have done something amazing with it. He has an un-named project set to come out in 2011; I know I’ll be watching for it… 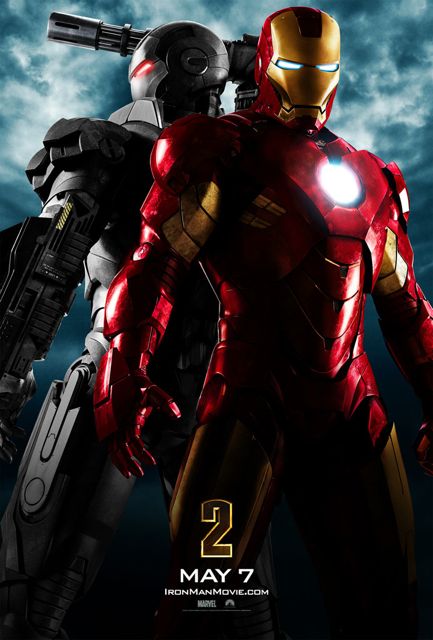 I’d never heard of this movie until today, but after watching the trailer above, I have to admit I got a little quite misty-eyed by the end…I’m a sucker for football movies, and true stories where someone’s life is changed for the better, so when you combine the two it just gets me. The actor who plays “Big Mike” is 6 foot 10 inches!

UPDATE: Apologies for the fact that the video starts playing automatically…I removed it because of that. Check out the trailer over on the site. 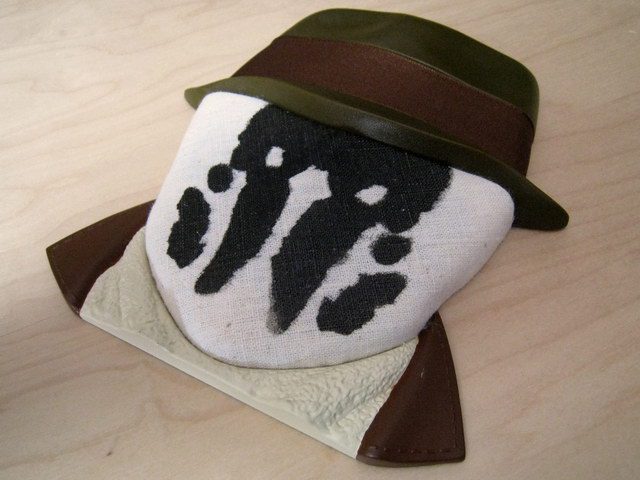 This is what the case for the Watchmen movie looks like if you get the special edition from Best Buy. Sweet eh? 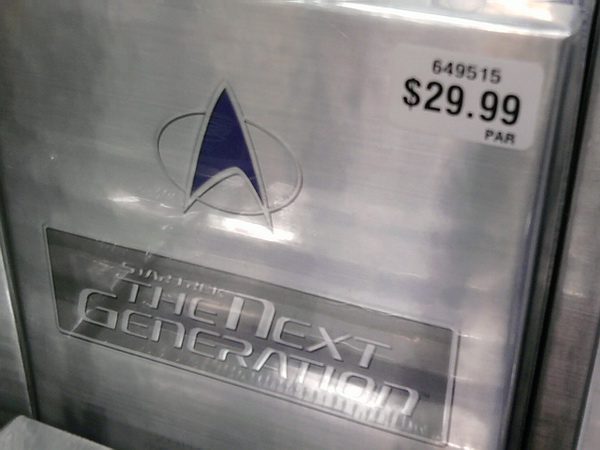 Looks like after all the Star Trek fans like me paid $100+ for each season boxed set, the powers that be decided to drop the price to a more sane level. I saw the boxed sets at Costco for $29.99 CAD each. Quite a good deal for some classic Trek!

As I watch the season finale of The Celebrity Apprentice, I thought it might be fun to make some point-form notes about what I think about the show and the people on the show (without getting mean…well, too mean). And, spoiler alert, you don’t want to look at this post if you haven’t watched the finale yet. Unfortunately I managed to ruin the surprise of who won for myself earlier today, but I’m still interested in how it all plays out. Here goes:

UPDATE: I forgot to mention perhaps the most important thing about watching this show…that video editors can put things together to tell whatever story they want. Something to keep in mind when you watch any reality TV show – what you’re seeing is an edited version of what actually happened, often with heavy bias from the editor toward maximizing the drama of the scene.

So…the new Star Trek movie. What to say…what to say. By now most of the hardcore Trek fans will have seen it and will have their own opinions about it. Myself, I really enjoyed it. What’s worth saying to all the non-hardcore fans is that this movie is unique amongst all the previous Star Trek movies in that it’s not a springboard from a TV show. Yes, the characters are the same, but the actors are not, and as such the movie is quite approachable and stands on its own as a solid action movie. There are many nods to the characters created by Gene Roddenberry, and certainly Trek fans who know the lore inside and out will find much to enjoy here, but unlike basically every other Star Trek movie, you don’t need to have a deep knowledge of Trek to enjoy what’s put in front of you. On one hand, I’m sad to see the old Trek fade away – I thought that Star Trek: Enterprise was killed off too soon, and I was hoping for one more Star Trek: The Next Generation movie. On the other hand, this is an exciting re-imagining of the Star Trek universe that breathes life into the wheezing carcass of a franchise that had all but sputtered out, at least in the minds of the general public. Whether or not this evolves into a series of movies that would make Gene Roddenberry proud has yet to be seen, but at the very least this new crew is bringing Star Trek to a new generation of movie-goers. Live long and prosper! 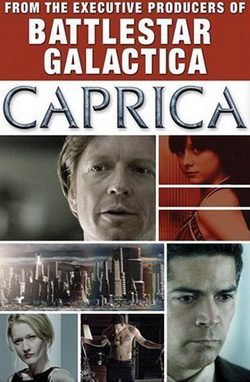 Amazon.ca delivered this DVD to me yesterday, so I eagerly watched it last night with Ashley. If you haven’t heard yet, it’s the premiere episode of the new TV series Caprica, released in DVD format prior to the launch of the TV show (which happens in early 2010).  I didn’t really have much expectation going into it – it’s a completely different set of actors, a completely different storyline, and while the Executive Producers of Battlestar Galactica are involved, all in all it’s a different beast than BSG is. The DVD paints a rich back-story to BSG – we get to see some of what the civilization was like before the events that start off BSG. Looks like it was still shot in and around Vancouver though.

There’s a lot to like with Caprica – the acting is solid, the storyline is compelling, and the special effects are top-notch. The CG robotics in particular are extremely well-done – I haven’t seen realism like that to date. Being straight to DVD, they get to add things that a cable TV show can’t have – namely, nudity. It was almost comical how they used it as a part of the intro to a certain location every time, but it’s not so gratuitous as to be distracting.

It will be interesting to watch Caprica as it goes to television – will it be able to maintain itself? BSG kicked off with such a huge bang – the annihilation of the human race – that it was able to coast on the shock of that for many an episode. Not in a lazy way mind you; they built on it very effectively. Caprica has no such event, so they have to rely on their own plot elements to move the story forward. With this 90 minute direct-to-DVD movie, Caprica is off to a good start.

I don’t know if I’ve ever seen an interview filled with more awkward pauses – I really have to hand it to the host, he tried his best to keep it together. Billy Bob Thornton was clearly on some heavy narcotics – he was unable to answer even the simplest questions such as “How long has your band being playing together?”. Then to watch Thornton get angry with the host for mentioning that he’s an actor…wow. I watched the YouTube HD version, and I noticed the image below on one of the shots: 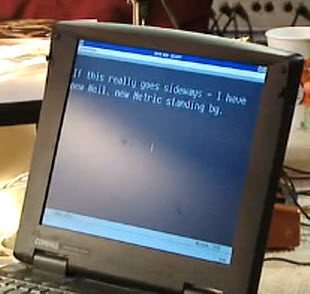 If you can’t quite make it out, it says “If this really goes sideways – I have [someone] Keil, new Metric standing by”. This is a message from the producer to the host, telling him that if the interview tanks even worse, they can cut to another guest. That’s disaster planing at its finest right there.

I can’t claim to know much about the style of music that Billy Bob Thornton claims to make, but after listening to it on Amazon.com, I can firmly say that I don’t like it very much. I used to be quite anti-country music, largely because I didn’t like the old-school twangy stuff. I like some country music now, mostly the rock-country or pop-country crossover stuff.

At any rate, listening to The Boxmasters, what I hear is pretty straight-ahead boom-chick country music, with a perfectly average vocal lead. There’s nothing interesting or noteworthy about this music from what I can tell – and I sure as hell don’t hear any ’60s British influences…what am I missing here? My guess is the only reason they’ve been able to put out three albums in less than two years is because it’s all self-produced and no one has the guts to tell ol’ Billy Bob that not every song the band comes up with is good enough to be on a record. Most bands will generate 2-3 times more music than can fit on an album, and what goes on the album is the best of those songs.

The only reason The Boxmasters are getting any media attention at all is because Thornton is in the band. Take his personal fame out of the equation, and you have an average-sounding weekend country bar band worthy of exactly zero attention.  For him to get angry about the radio host mentioning his acting experience makes him a complete prick – it’s the only reason his band was invited onto the show. I might like him as an actor, but as a human being, he needs to grow up.