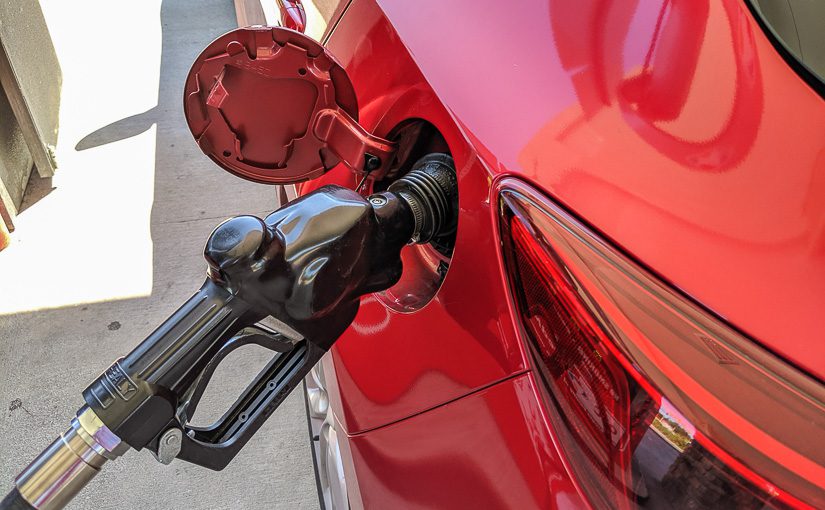 Five years ago, in 2014 when I was looking for a new vehicle, I actively researched electric vehicles (EVs) and test drove a Chevy Volt. I was keenly interested in EVs. The Volt drove how it looked – which is to say, uninspiring – and for the price I thought the interior was cheap. It just wasn’t compelling.

There were really no other viable options for me at my price point (Tesla’s were a far off $80K+ dream), so I instead purchased a fun little zippy car: a Mazda 3 Touring in red. When I bought it I loudly proclaimed (mostly to myself) that it would be the last gas vehicle I’d ever buy. How much did I believe this? Well, when we moved into our new house in 2012 I had the garage pre-wired for EV charging on both sides – I knew the future that was coming even if I couldn’t get the EV I wanted…yet.

The Mazda 3 didn’t get driven much until 2019 since I worked from home much of the time – it still had that new car smell even after a few years. Most of the miles were put on our Canadian 2009 GMC Acadia (fondly known as “Big Red”) as my wife drove our kids to and from school (30 minutes each way). We also drove Big Red on at least one big road trip back to Canada each year – it had 123,000+ miles on it and was a solid vehicle for our needs…but it was time for a change.

A little over two months ago, I purchased my first electric vehicle (EV). This decision was years in the making, but I thought it would be helpful for those thinking about making a similar decision to understand my thinking in making this purchase.

Reason #1: I wanted to vote with my wallet on lessening our carbon footprint as a family

Most people wouldn’t describe me as an environmentalist, but I have a deep respect for nature and believe as a species we have a solemn duty to be responsible stewards of this planet and all the life on it. Sadly, we’re doing a pretty awful job at taking care of it. I believe climate change is real, and I believe that every person has to make every effort they can to reduce the environmental impact they create day to day. More people should work from home (if they have a job that allows for it), and fewer gas cars should be on the roads. I’m the guy that turns off his car in the drive through line, and I’m the guy that gives you the stink-eye if you’re sitting in your car idling in a parking lot. 🧐I want to be able to tell my kids we made a real effort to reduce the pollution our family puts into the world, and an EV was a concrete way to do that. Not everyone can afford to get an EV at this point, but we managed to make it work. In the coming years price points will go down, the used market will get more inventory, and EVs will be affordable for everyone.

EDIT: A few people have mentioned that unless your electrical power source is 100% clean (i.e. not from coal, natural gas, etc.) you’re not helping anything. That’s partially true depending on where you live, but if I have a choice between giving $50 to a gas station, whose sole function is to sell petroleum products for the oil industry, or giving $50 to my power company who has a growing mix of renewable green energy sources – and is under constant pressure to increase the renewable energy sources – then I’ll give it to my power company. Next, and this article goes into some detail on the thinking, greater demand for clean energy creates greater supply, and greater supply drives down the prices of creating that energy. The price of solar panels have come down tremendously over the past decade as demand has pushed R&D to make them cheaper. Lastly, and I’ll go into detail on this in a future blog post, there are ways to get 100% of your energy from clean sources if you’re in a country where RECs (renewable energy certificates) are sold. I use Arcadia Power; I pay about an extra $10 per month and 100% of my energy use is offset by the purchase of RECs from green energy sources. If you live anywhere in the USA, check our Arcadia Power and get $25 off your next electric bill by signing up (that’s a referral link).

Reason #2: I wanted to help accelerate the societal shift to electric vehicles

Significant change for one person is often hard. Significant change for a whole society is very hard – until the tipping point is reached and all the people who were resisting become part of the “well of course this makes sense now” wave. Someone has to go first to show the way, to encourage/cajole/sell the next wave on the benefits of the change. While I’m certainly not an EV early adopter compared to EV owners that have been at this for years, compared to the average car owner I’m part of the first wave of real change. If I can show others the many benefits of owning an EV, and be part of the change that’s needed, I’ll have done my part. Besides, promoting things I’m excited about comes naturally to me. 😁 Widespread EV adoption is going to take time, though with enough government and industry incentives it may happen in the next 5-10 years. I believe the tipping point is coming faster than most expect.

Reason #3: Our vehicle was starting to cost us a lot more money and the time was right for a change

Next to a house, a vehicle is the most expensive purchase most people will ever make – well, except maybe in the USA where healthcare is so expensive that “purchasing” wellness can cost tens of thousands of dollars 🙄 – but I digress. While a lot of people are certainly into the idea of an EV, the reality is that they are still quite expensive and if people have a vehicle that works well for them today, most people can’t afford to change to a different vehicle simply because they want to. It’s a bit like the upgrade to 4K TVs: most people will keep using their TV until it stops working, then evaluate their options when they need a new one. Our GMC Acadia didn’t stop working, but we’d had to put almost $4000 into it over the past two years, and for me that was frustrating. I had an enlightening conversation in a Facebook group with some friends about the costs of owning an older vehicle – ten years is the longest we’d ever owned one – so it was eye-opening to hear that this was pretty normal. Still, it hurt the wallet. 🙁

Although fuel prices in the USA are cheaper relative to many parts of the world, driving an SUV that gets 14 MPG is expensive. I’m planning on looking at our yearly costs of driving an ICE (internal combustion engine) in an upcoming blog post, but a quick look at historic data in Mint tells me we were spending $120 to $150 a month on gas just for the SUV. That’s $1800 a year in fuel costs alone. On the flip side, electricity is cheap in comparison – 11 cents per kW in Washington state. This is the upper end because before getting an EV we were already in the upper tier for monthly use; people who don’t use much could pay as low as 9 cents per kW. The EV we bought, which we charge every second day, costs $2.25 to top up from around half (so $5.50 from zero to full charge). Imagine if filling your gas tank cost you $5.50, and you could do it from home. That’s the glory of an EV!

ICE vehicles require regular maintenance, and the more you drive them the more you need. Synthetic oil changes in the GMC Acadia? $90 each. We did that 3-4 times per year depending on mileage. The complexity of ICE engines, and the sheer number of parts the vehicles have, mean that there’s a lot more that can go wrong. A few months back we replaced the left/right valve cover gaskets, spark plugs (x6), ignition coil, and plenum gasket on the Acadia. The bill? $1117. 😖A new battery? $154. Brakes pads wear out, and rotors also need to be resurfaced and sometimes replaced – I spent $1054 on those things alone over the past three years. Thankfully the maintenance costs on the Mazda 3 aren’t nearly as high yet, but the oil changes still cost $90 – they’re just needed less frequently as it isn’t driven as often. In a few years though when things start to go wrong with it, the repair costs will start to rise.

Hopefully this post unpacks some of my thinking in making the decision to go for an EV, and what some of the benefits are. If you have questions or comments, please feel free to post them. As for what I bought…well that’s coming up next. 😁