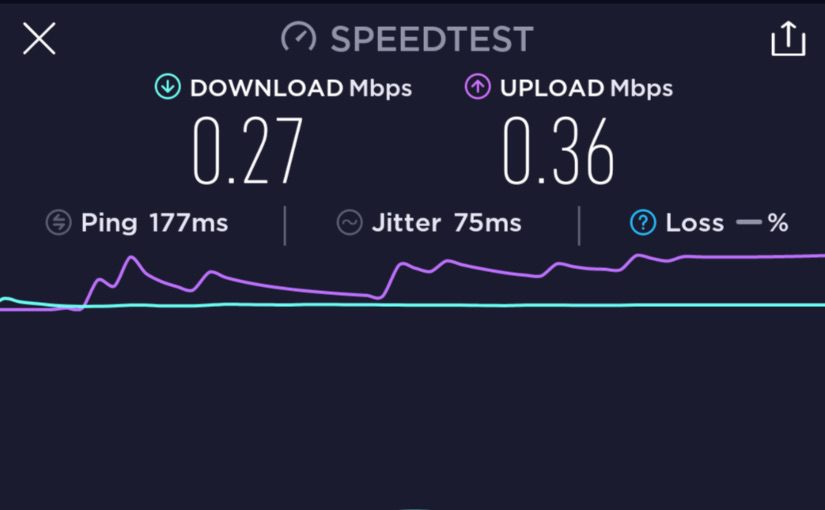 It seemed like the perfect plan for my wife and I to go on. Speeds and coverage where we live were decent. In Canada at Christmas time I did a few speed tests and saw excellent data speeds, in the 20mbps to 35mbps range (faster than what I can get in my house). I had no concerns about the speed when we boarded a plane in February 2020 to go to Mexico because when I was with Cricket (an AT&T company) I’d seen solid speeds.

I proceeded to use my phone as usual, but I noticed everything seemed to be taking longer than normal if it was anything more bandwidth-intensive than sending a WhatsApp message. So I did a speed test and the results were bad. Really bad. 😱

I did speed tests all over the resort where we were staying over a two week period, several times when we went into town a few miles away, and at the airport. It didn’t matter where I was, the speed never got past even 0.5mbps. I haven’t seen speeds this consistently slow in years, and this is dramatically slower than what I’d seen from Cricket Wireless when I was roaming.

Given that Cricket is also an AT&T company, I’d guess that the slow speeds I’m seeing as an AT&T PAYG customer are due to whatever roaming agreement AT&T has in Mexico – though, confusingly, AT&T is a telco in Mexico now so I’d hoped there wouldn’t be any roaming. I seem to recall seeing “Telcel” as the connected provider, so perhaps AT&T has no network in the part of Mexico where I was visiting.

Overall I plan to remain on the AT&T PAYG plan until our one year anniversary is up, then I’ll evaluate my options. It’s tough to beat that price point, and 2G-ish speeds are tolerable while on vacation so long as I set my expectations around what I can and can’t do.

* The sign-up process for the AT&T PAYG plan was hellish beyond words. I was porting two numbers, mine and my wife’s, and the first (mine) went fine. I was charged $330 and the port started. When we got to hers a few minutes later, the payment didn’t go through. Long story short, the second charge of $330 in quick succession tripped AT&T’s fraud system and locked the port process. It took eight phone calls over two days, three hours of my life on hold or in calls, and two extensive identity checks before my wife’s phone started working again. She had no data for two days. Why didn’t AT&T alter their fraud triggers to accommodate this new $300 PAYG plan? Because they’re AT&T. 🙄