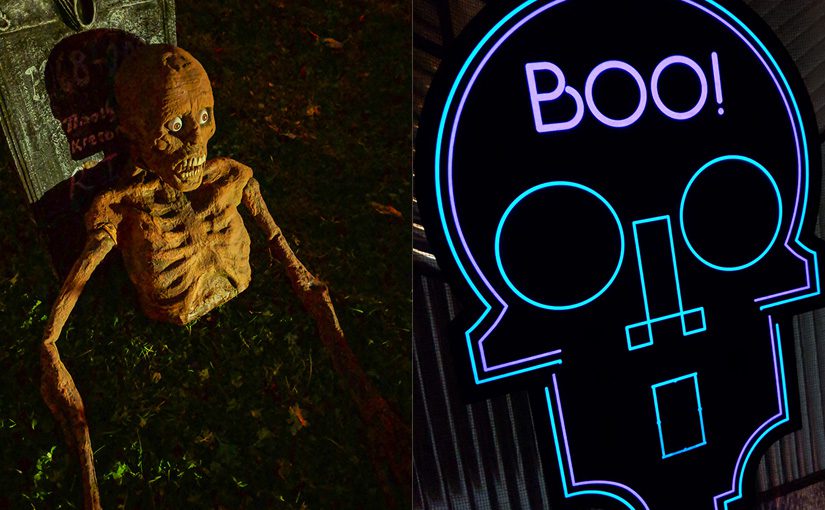 Last night I took my Pixel 3 XL out Halloween trick or treating with my kids and decided to see how well it handled real-world low-light conditions. This is without the forthcoming Night Sight, which by all accounts is extremely impressive. The images below are shot in regular camera mode, JPEG (I completely forgot about the raw mode option) with post-processing done in Lightroom. Lightroom noise reduction was not used on any photo. I could have posted the unretouched photos, but I always do some sort of post processing, either on my phone or on my computer, so this is real-world for me. I’ve also added some additional analysis on each photo for those that are curious, and linked to the full-sized JPEG (most are somewhat cropped, so none are original size).

The TLDR version? This Pixel 3 is the best camera I’ve ever used in a smartphone, and it has impressive optical image stabilization. It’s still a tiny sensor and subject to the same laws of physics as any other phone though, so it can’t work miracles. I’m generally impressed with how well it holds up at high ISOs that would make many phone images fall apart. 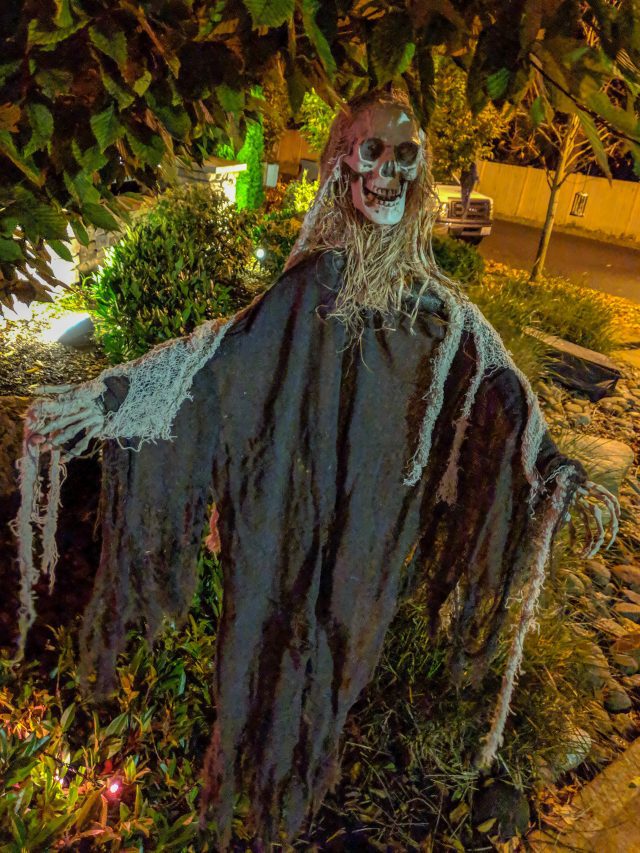 Above: this scene was quite dimly lit, despite what the adjusted image looks like, and is reasonably sharp given the camera was shooting at 1/15th of a second (which is below what I can properly hand-hold at without stabilization). It had to push to ISO 2728 though, which is why the cloth robe is noisy mush. It’s an OK picture if you don’t look too closely at the robe because other elements look decent. 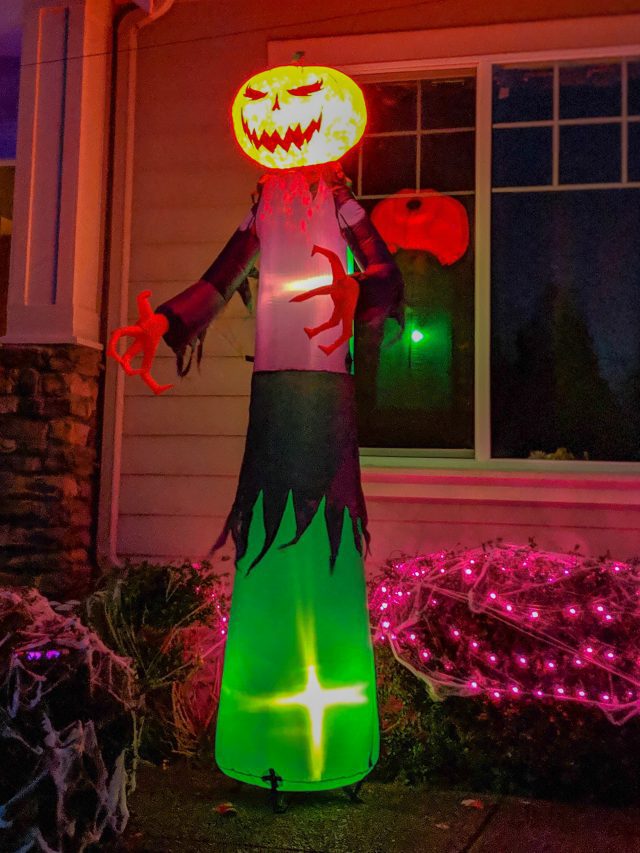 Above: this was a challenging scene with a brightly lit doorway (cropped out) and a brightly lit inflated pumpkin guy. I exposed for the pumpkin guy by tapping on him, but the Pixel couldn’t stop overexposing the head and blew the highlights completely. I’m not surprised though, this was a very challenging scene that I think even my Nikon D750 would have struggled with. Lots of compression artifacts. 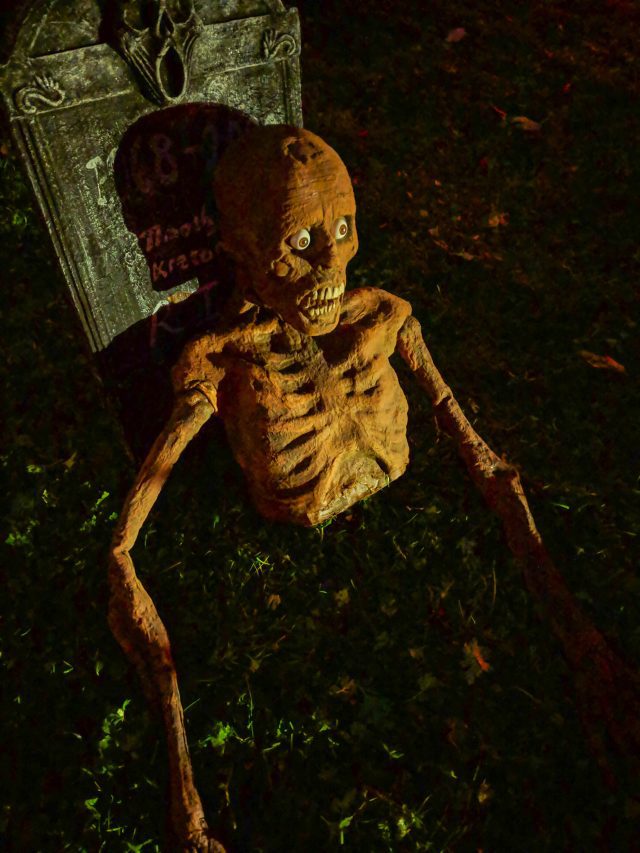 Above: one of my favourite photos of the night, this creepy zombie was in a dim part of a yard with indirect lighting. The Pixel 3 dropped to 1/7th of a second, which is extremely low for hand-held shooting, but still had to push to ISO 2134 so the detail falls apart. If you look at the full resolution image, it’s slightly out of focus – but a web sized version (what you see above) makes it look like the eyes are perfectly in focus (and the loss of detail matters less). I am impressed. 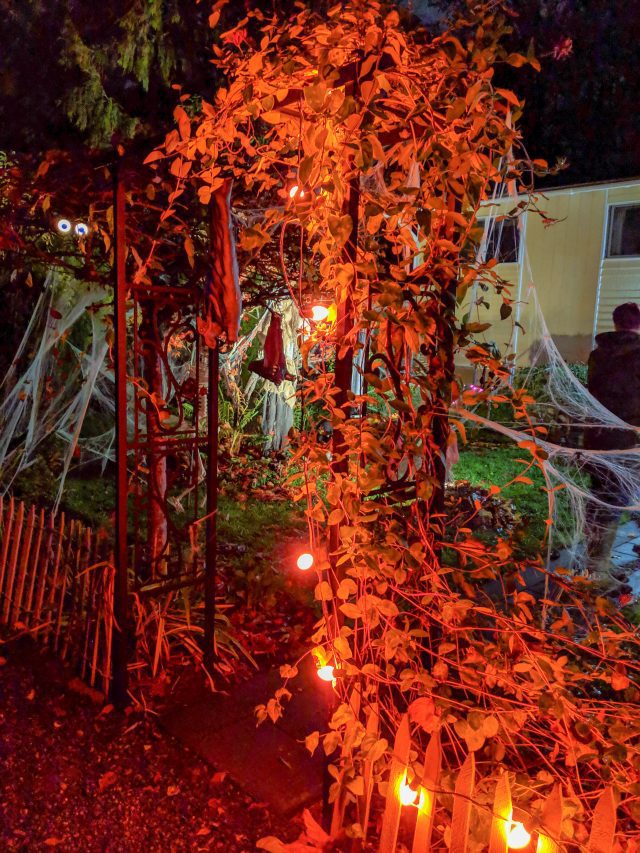 Above: this was directly lit by the orange light bulbs, and as such the exposure time was 1/15th of second at ISO 444. Because the ISO didn’t skyrocket like the other photos above, there’s some good detail left in the image and it’s reasonably in focus. The orange everywhere makes for some ugly compression artifacts at full size, but web-sized it looks pretty good. 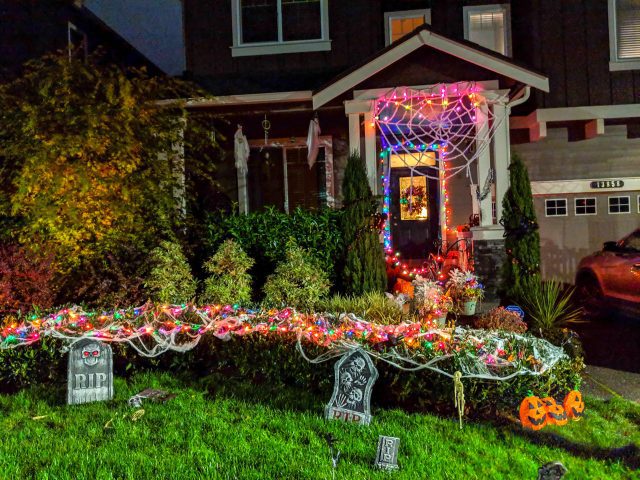 Above: the street lights helped keep this at 1/15th of a second, but at ISO 806 the detail in this scene falls apart more than I’d expect. It looks OK web-sized, but at full resolution it’s a horrible mess of noise and compression artifacts. I’m a bit surprised it doesn’t look better. It’s one of the worst images of the night, which is surprising given it only went to ISO 806. 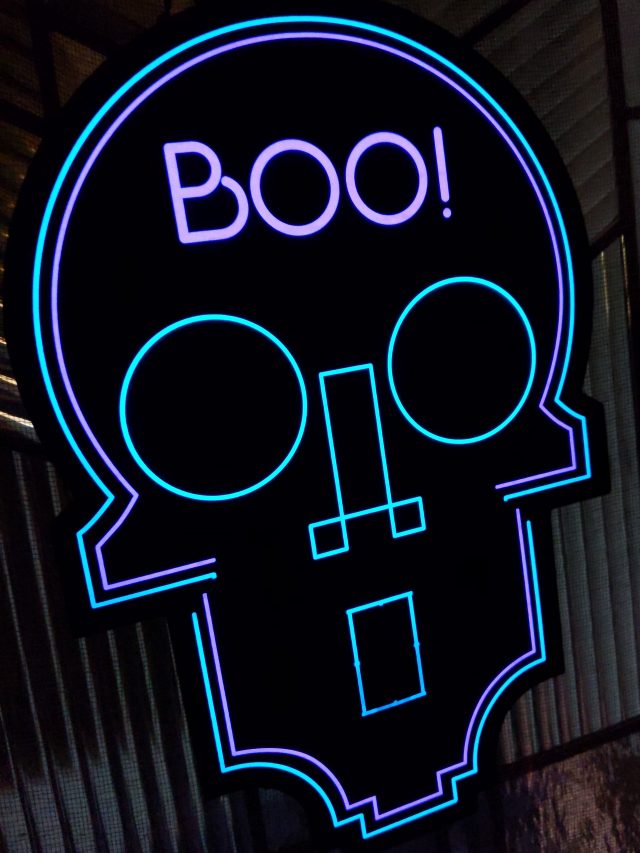 Above: one of the cleanest photos of the night, this LED-light skull gave off enough light to allow the Pixel to shoot at 1/25th of a second and ISO 389. The full size image looks quite good with very little noise (the inky black stays inky black) and there are no compression artifacts visible.