The first time I backed a Crowdfunded project was in 2011. It was a documentary about MMA legend Jens Pulver and from that moment on I was hooked. It always bothered me that the only technology I could buy was whatever large companies decided was what would sell; dumbing down to sell to the general market doesn’t always generate the best products. It’s similar when it comes to movies and creative endeavours, though those artists have had a someone easier path of direct support since the dawn of the Internet age and electronic payments.

Since that first project, I’ve backed 20 more products on Kickstarter, and another 27 on Indiegogo; 48 total campaigns, mostly in the technology or entertainment realm. While only one has truly flamed out into oblivion – a D&D documentary project that got sued by, I think, another D&D documentary project – many are in the vague “we’re building it” phase.

The different types of projects is a subject for another day, but for now I’d put them in two main buckets:

Projects in the #2 category tend to ship on time, because by the time the crowdfunding piece is in place, the project is almost finished – they’ve been building it for months/years.

Projects in the #1 category are where you’re rolling the dice because you’re betting not only on the ability of the inventor to bring the product to life, you’re also betting on his/her ability to manage timelines, outside vendors for production, and a whole host of other things. It’s fascinating to watch their journey; sometimes they flame out, and sometimes they rise to the occasion. But in almost every case…

The reality of just how far behind most crowdfunded projects get inspired me to create this graphic: feel free to share it. 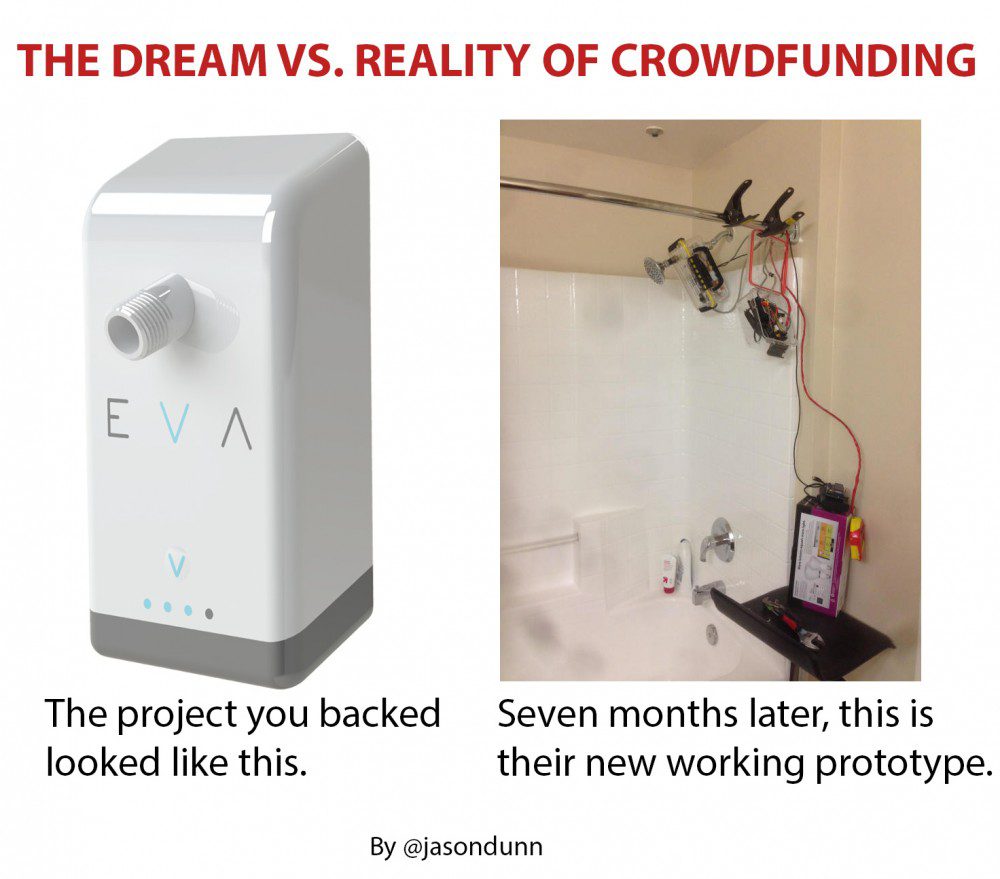 I can count on one hand the number of crowdfunded projects that have actually shipped on time – and those projects are ones where the object is very simple, or doesn’t rely on China-based manufacturing. The others fall into the spectrum of “slightly painful” to “complete disaster” from a timeline perspective. I have sympathy for people that run projects like this, because in my day job at AT&T I’m constantly faced with challenges of projects not having the resources required to finish on time, but most campaigns do a terrible job at regularly communicating with backers. There’s nothing worse than a project being behind schedule, and not communicating why to your backers. Most projects I back have comment pages that look like the Comcast Facebook page – angry people venting about being ignored and wanting their money back.

If you want to avoid angry backers, keep the regular updates coming; communication is key!

One project, the one that inspired me to write this blog post, is called the EvaDrop Smart Shower. I’m intrigued by smart home devices, and in particular the cross-section of hardware that allows me to understand and optimize my consumption of resources. The EvaDrop does some clever things with water pressure, and for $99, it seemed like a good product to back. That was back in December of 2014. A few weeks ago (July 2015), they sent out an email excitedly announcing their new prototype. In seven months since the project CLOSED, they’re just at this phase now – never mind the slick photos/renderings they showed when they were asking for money that made it look like it was fairly far along toward production.

(I should point out that I’m not particularly picking on EvaDrop – nearly every project I’ve backed has been late to market, so they’re just one of many examples)

How have your crowdfunded projects gone? What kind of experiences have you had backing projects? And if you’re someone who has actually run a crowdfunding campaign, I’m interested in hearing how it went for you…